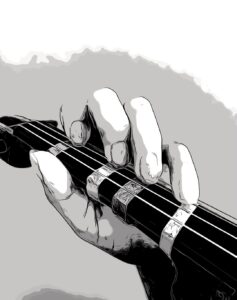 Each specific location of the left hand is called a position, which allows us to play violin in tune by finding the exact pitch related to this position.

Finger placement and finding 1st position on the violin

If you play a guitar, you will quickly realize that the violin is a bit more complicated instrument. It doesn’t have frets or marks like a guitar does. So it is more challenging to play in tune from the very beginning. We have to rely on our ears and muscle memory. Therefore, many beginners use a fingering chart, or they place sticky finger tapes on the fingerboard, which show where to place your fingers. The second way to play in tune is to pay closer attention to intonation. However, this will only work if you have a relative or an absolute pitch. If you do, you can continue training your ear, and then playing in tune will become much easier because your intonation will improve. Consequently, your fingers will develop muscle memory, so they will know where to fall on the fingerboard.
Let’s briefly summarize what you know. The first position is where you place the first finger to produce the next successive note after any open string such as G, D, A, and E. As you can guess, every next finger you put on the fingerboard will ring the next consecutive note.
Let’s go to the A string and find out what notes we can play in the first position. Here is a violin fingering chart for the A string and a photo of the left hand with fingers placed on the fingerboard. The first finger placed on the string A will sound note B, the second finger- note C or C# ( C sharp), the third one will produce note D, and the last one, the pinkie, – note E. If you are not yet familiar with the (♯) symbol, it means that this symbol raises the pitch to a half step higher, so you just move the finger a half-step higher. The (♭) flat symbol, is similar to (♯) sharp. Instead of raising the pitch, it lowers it by a half step so you would move your finger in the opposite direction. Normally we use the same finger for sharps or flats moving it in different directions: half-step lower for flats (♭) or half-step higher for sharps #. Any sharp# or flat♭ that is not part of the key signature is called accidental. We usually can find accidentals in modulations, development sections, to introduce a new tonality, and in any place where a composer wanted to diversify an existing harmony or a melody.
There is one more accidental which you will find when playing music, and it is (♮) – natural sign. It doesn’t raise or lower the pitch. Instead, it returns the previously altered note to its original or natural (diatonic) pitch within the same measure. However, if we are in a key with flats, a natural sign (♮) can raise the pitch as well.

Lets see an example below:

We usually use sharps to raise the pitch and flats to lower it. So when we want to move higher or have ascending melodic movement we raise it by a half step and add a sharp sign to the note. If it already had a sharp sign, then we would add a double-sharp sign. When we have a descending melodic movement we use a flat sign. Also, we use sharps depending on the key of the piece. For example, if we are in the key defined by sharps, such as G sharp major, or G sharp minor, we use sharps. On the contrary, if we are in F major or A flat minor, we use flats.

Vibrato on violin: How to do it effortlessly

I would love to answer any questions related to violin lessons and violin playing. You can email me at [email protected] or book your free trial lesson here.